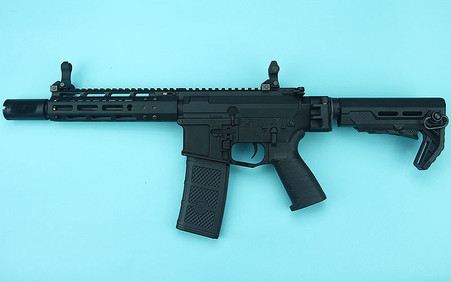 The Transformer folding battery stock takes the idea of being as compact and transportable as possible a step further. Unlike most AR-15 / M4 style rifles, the entire buffer tube and stock will fold to the side when not in use, greatly minimizing the overall footprint of the rifle. A unique feature of this folding stock is its ability to house a battery without exposing any wiring in its folded state; the battery system in this stock uses recessed contacts that automatically engage when the stock is deployed.

While the traditional version 2 gearbox has for the most part remained unchanged since its inception, small changes have occurred over time, usually as the result of popular user modifications that were then made into factory available options. With input from players and vendors, G&P has released their newest iteration of the Version 2 Gearbox, the G&P i5. While internally similar to their tried and true V2 gearbox, the i5 comes from the factory with a plethora of upgraded components. The i5 is powered by an M140 motor and features 8mm bearings for more robust performance and reliability. The top-down QD spring guide makes spring changes far easier, requiring only the removal of the upper receiver and buffer tube screw. No gearbox disassembly required.

Also included is an inline MOSFET with electronic trigger and Electronic selector, eliminating sensitive trigger switches and selector plates. The i5 gearbox takes the traditional V2 gearbox and makes it more reliable and user friendly, without sacrificing the performance that players have come to expect from G&P.

Disclaimer: While the Transformer Folding Stock has many safety precautions in place to prevent the contacts from short circuiting, it is recommended to disconnect your battery from your gun for storage and transport to reduce the risk of electric shock. Loose metal objects should be kept clear of the stock when the contacts are exposed (folded position).

This product hasn't received any reviews yet. Be the first to review this product!